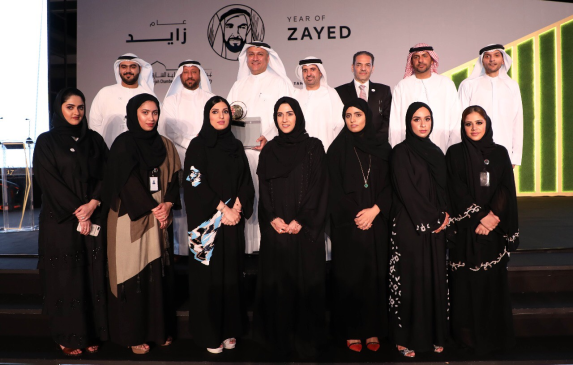 Sharjah Chamber of Commerce and Industry honored its outstanding employees with its Excellence Award 2017 at the annual ceremony held this year at Al Jawaher Reception and Convention Centre, celebrating another year of hard work and diligent efforts that culminated in achievements and successes.

HE Al Owais opened the ceremony with a speech praising the achievements and successes of the Chamber and all its affiliate institutions throughout 2017, with staff members who are proud to belong to this pioneering and ambitious institution, working as one team to achieve the UAE’s interests.

Al Owais stressed that serving the national economy and the business community in Sharjah require cadres of various levels of career and leadership to make more efforts for more excellence, creativity and innovation,  enhancing the UAE’s leadership and Sharjah’s stature and  uniqueness.

Al Owais called on all employees to be the righteous sons of the founding fathers, considering the bright present as the first fruits of the wise vision set by the late Shaikh Zayed Bin Sultan Al Nahyan (may Allah bestow His mercy upon him): “Continuing on the journey started by "Zayed Al-Khair" requires all of us to perform our duties to the best of our abilities for our sons’ and daughters’ interests, as well as accelerating the pace of development and double the giving to move forward firmly and faithfully in the footsteps of the wise leadership that harnesses wealth to build the nation and the citizen through education and building a society and a knowledge economy”, Al Owais said.

Al Owais continued: "Many of our parents are not college graduates but 99 percent of you are university graduates today, and this is but one example of the qualitative leap that has been made and the amount of work done by the UAE in record time. We are meeting today to speak from the heart and call on you to continue to work as a team for the homeland’s interest”.

Al Owais concluded by thanking His Highness Dr. Shaik Sultan bin Mohammed Al Qassimi, Member of the Supreme Council and Ruler of Sharjah, and His Highness Sheikh Sultan bin Mohammed bin Sultan Al Qassimi, Crown Prince and Deputy Ruler of Sharjah, for their unlimited support to enable the Chamber to provide the business community in Sharjah with the best services and achieve a sustainable economy in the emirate. Al Owais also paid tribute to the Emirati mother on the occasion of Mother's Day by saying that the best young men and women are in the fields of science and the labor force with the support of  virtuous mothers who succeeded in encouraging generations to achieve academic success, work and creativity.

For his part, HE Khalid Bin Butti Al Hajri, said that this ceremony is an annual occasion dedicated to honoring the best departments and members of the Chamber who have excelled in the past years and worked in line with the Chamber’s vision to achieve the wise vision of our leadership President His Highness Sheikh Khalifa bin Zayed Al Nahyan, and His Highness Dr. Sheikh Sultan bin Mohammed Al Qassimi, Member of the Supreme Council and Ruler of Sharjah, who constantly emphasizes the need to improve the performance of the institutions operating in Sharjah, caring for human resources in all categories and making creativity and innovation the means to providing the best services for the development of the commercial sector in our beloved Sharjah.

Nada Al Hajri, member of the jury, delivered a speech on Sharjah Chamber Excellence Award in which she stressed that this year's award selected members of the judging teams based on the highest standards of scientific and practical expertise, in addition to the establishment of grade points based on accurate mechanisms to ensure absolute neutrality and reduce the probability of errors. Al Hajri pointed out that the most prominent feature of this edition of the Award is the formation of a higher judging committee that has thoroughly reviewed all grades and discussed the assessors and the relationship between grades and evidence, and she explained that all nominees were interviewed, the evidence scrutinized and all observations recorded in order to provide constructive follow-up reports as the final product of the evaluations and a summary of the strengths as well as the opportunities for improvement for departments, teams or individuals.

On behalf of Sharjah Chamber Excellence Award’s team Nada Al Hajri thanked the Chairman, board of directors, Director General,  Expo Center and the Sharjah International Commercial Arbitration Center for their support for this panel, making possible this opportunity which has earned praise as one of the best applied management practices in the development and motivation of institutions to keep pace with modernization and innovation.

At the conclusion of the ceremony, a short film was shown in appreciation for mothers, followed by a competitive match between Sharjah Chamber and Expo Center’s staff members in an information contest, and then a dinner banquet and entertainment  followed.