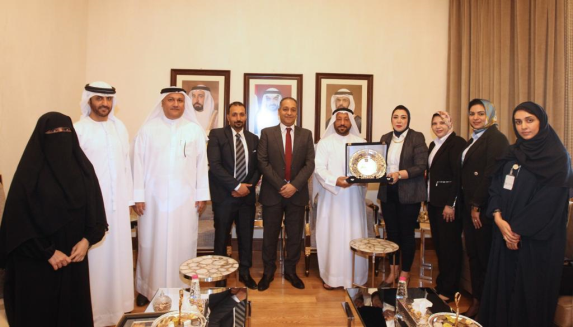 The delegation's visit lasted for four days and aimed at exchanging experiences, learning about best successful practices in serving the business community, discussing prospects for bilateral cooperation in various economic and investment fields of common interest, and promoting trade.

Ibrahim Rashid Al-Jarwan emphasized the importance of this visit, which will contribute to strengthening economic relations between the UAE and the Arab Republic of Egypt, which are witnessing unprecedented development between the two brotherly countries, through developing cooperation between the Sharjah and Alexandria Chamber, and establishing more joint projects that are feasible for both countries, as well as coordinating to organize business visits with the aim of having a closer look at the fields of partnership and investment, and benefiting from the advantages and facilities provided by Sharjah and Alexandria in various economic sectors.

The delegation's visit plan included a visit to the SCCI headquarters, where they were introduced to the departments and sections as well as the key services provided to the SCCI members. The Egyptian delegation members were also taken on a tour of Expo Centre Sharjah, the Sharjah International Commercial Arbitration Centre (Tahkeem), and Sharjah Chamber’s branches in Al Dhaid and Khorfakkan. The guests also visited key institutions and as  the University City, the Sharjah Center for Astronomy and Space Science, the Arab Academy for Science, Technology and Maritime Transport, and the House of Wisdom, in addition to prominent tourist attractions in the Emirate of Sharjah.