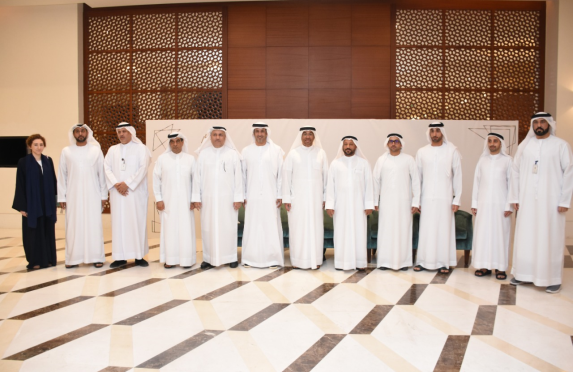 HE Ahmed Ali Al Sayegh, Minister of State, has visited the Sharjah Chamber of Commerce and Industry (SCCI) to discuss ways to boost the private sector's contribution to the national economic development.

During the visit, the minister stressed that all chambers of commerce and industry in the UAE can play a significant role in increasing the private sector's contribution to the national economy, highlighting the need to link its priorities with the UAE’s strategies in order to promote national economic growth and sustainability.

Al Sayegh was received at the SCCI headquarters by HE Abdallah Al Owais, Chairman, in the presence of Sheikh Fahim Bin Sultan Al Qassimi, Executive Chairman of the Department of Government Relations, HE Saeed bin Mubarak Al Hajri, Assistant Minister of Foreign Affairs and International Cooperation for Economic and Trade Affairs, and HE Mohamed Ahmed Amin, SCCI Director-General, as well as a number of Ministry of Foreign Affairs and International Cooperation personnel.

The discussions touched on ways to attract additional foreign direct investment to the UAE and the possibility of reaching new markets to promote the UAE’s various investment opportunities while also strengthening collaboration with the nation's diplomatic missions abroad.

HE Al Sayegh commended SCCI for its relentless efforts and milestones, which led to enriching the national economy with the expertise and programs required to develop a conducive business environment that supports the realization of the UAE’s strategies aimed at achieving sustainable economic development.

He noted that the UAE, thanks to its successful business model, has become a global trade and investment hub, taking the lead in many indicators of competitiveness, trade, and investment.

"Chambers of commerce and industry can benefit from the UAE's expanding capabilities and its growing economic diplomatic relations to improve cooperation with different nations that are considered target markets within the UAE strategy for attracting foreign investment. The country boasts an active and prosperous economic business environment, modern infrastructure, and effective economic legislation that can easily attract foreign direct investments," the minister said.

For his part, Al Owais welcomed HE Al Sayegh and his accompanying delegation to develop programs and initiatives that underpin the business sector and enrich Sharjah’s investment environment.

Al Owais stated that the UAE’s investment promotion policies have not only increased private investments but also expanded the private sector’s contribution to the country's development process.

He affirmed that the SCCI is keen to broaden its collaboration with various local, regional, and international counterparts through agreements and memorandums of understanding to both support and open up new export markets for the local business community in line with the UAE’s strategic plans.

Al Owais also emphasised that the SCCI will continue to make every effort to effectuate the agreements concluded by the UAE with other nations to bring about the ultimate goals of these deals, including maximizing trade exchanges, boosting local, regional, and international trust in the business community, and advancing the state's sustainable economic development.