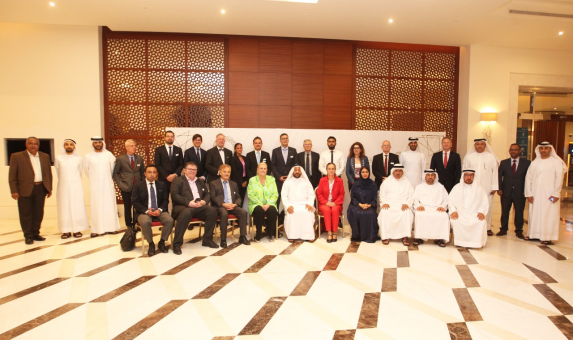 The forum was held on the sidelines of a visit by a high-level business delegation from Germany and comprised a large number of business owners and representatives of major companies specialized in renewable energy, electricity, banking, healthcare, and information technology.

SCCI invited German industrial and commercial businesses to invest in Sharjah and benefit from the emirate’s numerous advantages and promising investment opportunities, and urged German investors to increase their stake in the region’s market by setting up their businesses in Sharjah or engaging in projects with local businessmen, particularly in the UAE's largest industrial cities and free zones, which offer facilities and competitive guarantees.

His Excellency Abdullah Sultan Al Owais, Chairman, and Johann Erich Wilms, Chairman of the German Near and Middle East Association, head of the German delegation, led discussion at the forum.

The data also showed that the trade exchange between the two countries was made up of imports worth AED 427.4 billion, while exports and re-exports contributed AED 17.1 billion and AED 33.4 billion, respectively. When compared to the end of 2020, the UAE-Germany trade exchange increased by 12%, from AED 31.5 billion to AED 35.3 billion.

Johann Erich Wilms noted that the forum will not only push the economic relations between the two sides to broader horizons  but will also serve the business community and support the aspirations of the private sector on every side, especially in the industrial, commercial, and investment fields.

The forum was concluded with bilateral business talks between businesspeople from both sides, where they outlined the advantages their businesses offer.

During the meeting, German companies also expressed their interest to expand their investments in the Emirate of Sharjah and take advantage of the supportive environment, distinguished infrastructure and strategic location to launch into the Arabian Gulf markets.