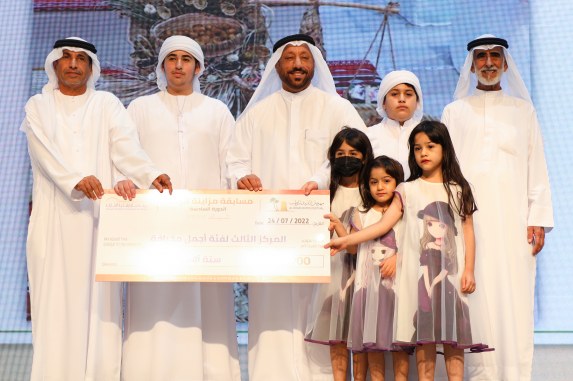 Organized by the Sharjah Chamber of Commerce and Industry (SCCI) from July 21 to 24, the festival drew more than 30,000 visitors, who explored and learnt about the best and finest types of dates. The event was held under the theme "The Aroma of The Past... The Blossoming Present.”

The festival was concluded with an honoring ceremony held in the presence of Abdullah Sultan Al Owais, Chairman of the Chamber, a number of members of the Chamber’s Board of Directors, Abdul Aziz Shattaf, Assistant Director-General for the Communications and Business Sector, and Mohamed Mosbeh Al Tunaiji, the festival's general coordinator. This is in addition to members of the Organizing Committee and a number of directors, officials and representatives of government entities taking part in the event.

Al Owais together with a number of officials and members of the festival’s organizing committee honored winners of the beauty competitions, some government entities and partners.

Cash prizes worth Dh 1 million have been distributed over the course of four days to 145 lucky winners of the festival’s six beauty contests, for which hundreds of farmers competed to display the best types of local dates and fruits from the UAE, especially Sharjah.

Abdullah Sultan Al Owais, Chairman of the Chamber, stressed that the event has recorded another successful edition thanks to the chamber’s commitment to constantly developing each new edition’s activities to maintain its positive and rapid growth pace.

He emphasized that the chamber will spare no effort to promote and preserve the historical status of palm trees, as well as to develop the palm plantation sector to ensure its sustainability. To do this, Al Owais said, the chamber will hold more events, boost the momentum of competitions, and offer guidance to farmers in an effort to inspire them to use good production techniques for dates and raise the quality of their yield.

For his part, Abdul Aziz Al Shamsi, Acting SCCI’s Director-General, said that this year's event saw an amazing turnout of exhibitors who were eager to compete for the competition’s six categories. They have completely cooperated with the contest's rules and have reaffirmed their commitment to improving their farms and products.

“The successful conclusion of the event demonstrates that the chamber has realized its strategic objectives already set for the event, which include highlighting the quality and authenticity of Emirati products, increasing their global competitiveness and diversity, and strengthening the food security of the nation by empowering farmers to continue caring for palm trees,” Al Awadi added.

Mohamed Mosbeh Al Tunaiji, the festival's general coordinator, stated that the sixth edition has been exceptional by all standards in comparison to earlier versions thanks to hosting a slew of economic, commercial, and cultural events and activities that were planned in a distinctive heritage atmosphere.

He lauded the fierce yet healthy competitions among palm farmers who were keen to display different kinds of dates. Without a doubt, this has improved the festival's capacity to draw a sizable number of guests,” Al Tunaiji said.