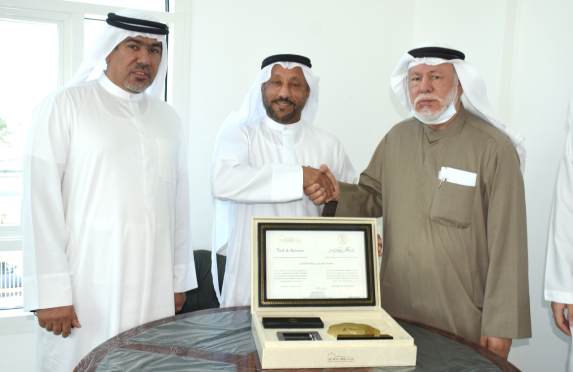 HE Abdullah Sultan Al Owais, Chairman, paid a visit to a number of former board chairmen and members since its founding over 50 years ago.

The initiative is coinciding with the Chamber’s Golden Jubilee celebrations and comes in recognition of its former board members’ and chairmen’s contributions along its journey.

Al Owais handed the exclusive golden jubilee shield and award certificates to H.E. Humaid bin Nasser Al Owais, HE Abdul Rahman Bu Khater, HE Ali Marzouq bin Kamel, HE Rashid bin Ali Dimas Al Suwaidi, and HE Mahmoud Khairallah Al Hajji during visits made to each of them, in appreciation of their tireless efforts to foster Sharjah’s economy as the backbone of economic development in the emirate.

"This tribute is the least we can do for these prominent figures who laid the Chamber’s solid foundations and fostered its role in enhancing the emirate’s position in the local and global economies, promoting the business sectors and serving the UAE’s economy, adopting comprehensive economic and social development programs, in line with the directives of His Highness Dr. Sheikh Sultan bin Muhammad Al Qassimi, Supreme Council Member and Ruler of Sharjah," said Al Owais.

Al Owais assured the former members that the current board of directors will always continue on the same path of success and achievements and support all business sectors of various activities to help achieve Sharjah’s economic vision.