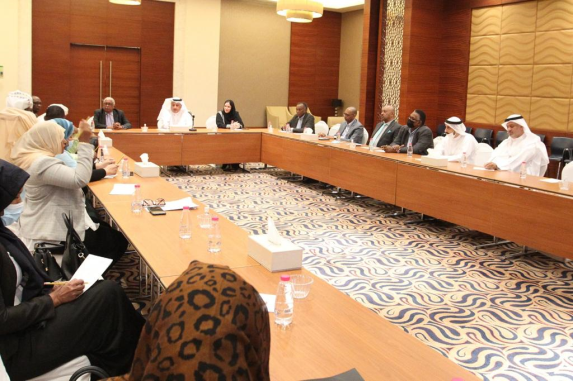 Sharjah Chamber of Commerce and Industry (SCCI) hosted a media delegation from the Republic of Sudan comprising journalists representing select print media outlets, eager to learn about the Chamber’s role, experience and pioneering services provided to its business community.

The Sudanese media delegation is visiting Sharjah in collaboration with the Sudanese Business Council that’s working under the Chamber’s umbrella, and was received by HE Mohamed Al Awadi, Director General, who introduced them to Sharjah Chamber's new strategy and vision to sustain its status as a catalyst of commercial and industrial development in Sharjah.

HE Al Awadi welcomed the delegation and thanked the Sudanese Business Council for organizing the event, opening doors of communication and cooperation with the Republic of Sudan through the media, a major partner in the development of trade relations, and highlighted  areas of investment and mechanisms of cooperation between the two sides.

Al Awadi described Sharjah as an attractive and promising investment destination with flexible investment legislation, incentives and facilities offered to foreign investors, and a major contributor to the industrial sector across the UAE. He added that Sharjah is a thriving tourist and cultural destination, blessed with an attractive business environment for foreign investments in the region, thanks to its strategic location between east and west and with sea ports on  both the Arabian Gulf and the Indian Ocean.

The Sudanese media delegation expressed their admiration for the progress witnessed in Sharjah, and noted the level of development that characterizes Sharjah Chamber, and promised wide coverage for it in their media press releases on Sharjah, as the Chamber continues to play its role in developing joint economic work between the two sides.

HE Al Awadi concluded the visit by inviting the Sudanese delegation to visit the Middle East Watch and Jewelery Exhibition at Expo Centre Sharjah and led them on a tour of the Chamber’s Permanent Exhibition of Local Industries that showcases its journey, branches, activities, and services provided to its members, as it strives to strengthen Sharjah’s leading economic position as a regional hub of international trade.