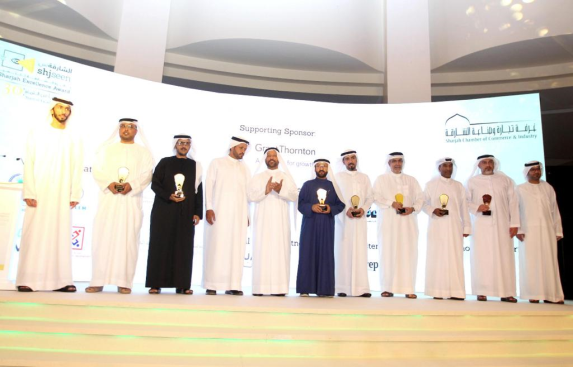 Under the patronage of His Highness Sheikh Sultan bin Muhammad bin Sultan Al Qasimi, Crown Prince and Deputy Ruler of Sharjah, the Sharjah Chamber of Commerce and Industry (SCCI) organized on Wednesday the official ceremony of the "Sharjah Excellence Award", where winners of enterprises from the public and private sectors and strategic partners have been honored.

HE Abdullah Sultan Al Owais, Chairman of the SCCI Chairman of the Board of Trustees of the Sharjah Excellence Award, honored the winning institutions and individuals, partners, sponsors, members of the jury committees, and the award team.

Al Owais congratulated the winners and lauded the efforts of evaluation teams and jury committees of the 2020/2021 Award cycle, highlighting the development stages of the award over the past 30 years, which started in 1990 with one category, to reach 9 categories today.

He stated that the award has gained a major foothold as a catalyst to spread the culture of institutional excellence and total quality management within the Sharjah business community.

Al Owais continued to say that the Sharjah Excellence Award has played a key role in improving the performance of business enterprises to support the goals and aspirations of the local and federal government when it comes to enhancing the position of the UAE as a major destination for investment and growth in the region.

The SCCI Chairman added: "The Chamber will continue to develop the award categories and launch similar initiatives to create a competitive environment conducive to enhancing productivity, creativity, and innovation. This comes in line with the directives of the Sharjah government to spread the best practices of total quality and excellence, as well as the award vision for the benefit of Sharjah’s economy, by promoting sustainable economic growth and recognition of achievements in business."

Sharjah Excellence Award is initiated by the SCCI to create the investment climate, enhance its competitive capabilities and help it benefit from the values of quality, leadership, and innovation. The award aims to achieve sustainable economic growth, support emerging investments, and honor distinguished businesses in all sectors.

The award criteria are based on the Excellence Model of the European Foundation for Quality Management (EFQM), which adopts comprehensive strategies to improve institutional performance in accordance with the highest international quality standards.