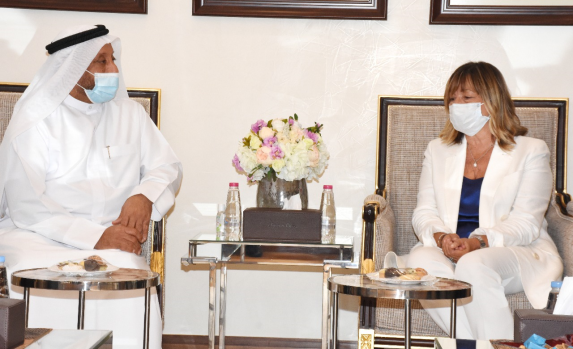 The Sharjah Chamber of Commerce and Industry (SCCI) welcomed a high-level Italian delegation on Thursday, led by Donatella Tesei, President of the Umbria Region. The two sides discussed ways to strengthen cooperation in cultural, scientific, intellectual, and technological areas, as well as the potential of commercial cooperation between Sharjah's investment institutions and their Italian counterparts. The visiting delegation was received by HE Abdullah Sultan Al Owais, Chairman, SCCI, who emphasized SCCI's desire to strengthen relations between Sharjah and the Italian region. He noted the areas of future cooperation between the two sides are many and varied, where there are more than 4000 attractive local, regional and international events in Sharjah. He added: "Sharjah also enjoys a strategic location alongside proximity to the Gulf region and the world, let alone the ideal environment for investment in various vital sectors. It is also home to academic research centers and major public and private universities in the region. He pointed out that the Chamber has various programs in this regard and sponsors many initiatives to encourage scientific research and innovation, in addition to the trade missions dispatched to countries of the world to strengthen partnership relations between the local business community and its counterparts in other countries and learn about different cultures. Donatella Tesei expressed her delight at visiting Sharjah, in which she started off her tour to the UAE following her election, citing Sharjah's pioneering reputation at all levels, particularly in the cultural and knowledge economies. She highlighted the role of Sharjah in enriching the book and culture industry through the Sharjah International Book Fair, the world's third-largest exhibition, in addition to the great momentum of events that enrich the cultural landscape in the emirate. Tesei highlighted her country's desire to collaborate with Sharjah via the Chamber of Commerce and Industry in a variety of investment industries, most notably information technology.