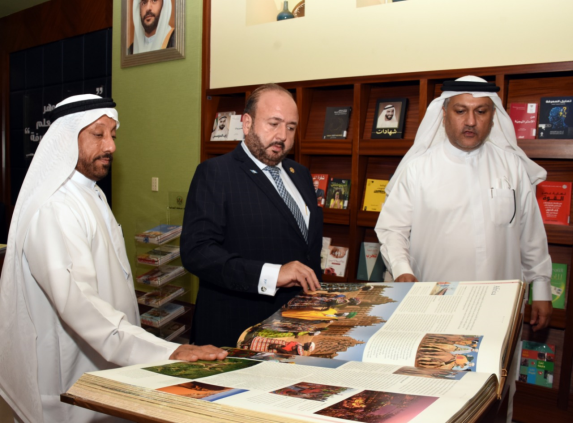 The Sharjah Chamber of Commerce & Industry (SCCI) welcomed a high-level government delegation from the Republic of Guatemala, headed by HE The Minister of Economy of Guatemala, Antonio Malouf, to discuss ways to develop economic cooperation and trade exchange relations between the two countries, as well as investment opportunities available in both sides.

The Guatemalan delegation included Vice Minister of Foreign Affairs, Shirley Aguilar, and Mr. Lars Pera, Ambassador of the Republic of Guatemala to the UAE.

The visiting delegation was received by HE Abdullah Sultan Al Owais, Chairman, SCCI, in the presence of HE Waleed Abdul Rahman Bu Khatir, SCCI Second Vice-Chairman, HE Raghda Taryam, Member of the SCCI Board of Directors, and HE Mohammed Ahmed Amin Al-Awadi, Director-General, SCCI.

While welcoming the visiting delegation, Abdullah Sultan Al Owais lauded the visit of the Minister of Economy and his accompanying delegation, commending the depth of relations and distinguished partnerships between the two countries, especially in the economic and commercial aspects.

Al Owais noted that the current visit was preceded by previous visits by official Guatemalan delegations to the Chamber, which, in turn, took part in the bicentenary of the Republic of Guatemala during a ceremony held at the House of Wisdom the last month.

This reflects the depth of relations between the UAE and Central American countries in general, which are seeing ongoing development, especially at the economic level, he said.

Over the past five years, trade relations have expanded by more than 40 percent, and the UAE's investments have exceeded $670 million since 2003, Al Owais continued.

"The SCCI is eager to enhance bilateral cooperation and trade exchange and encourage investments in vital sectors, which contributes to further strengthening the bonds of cooperation and advancing them to broader horizons that serve common interests."

The SCCI Chairman pointed to the SCCI's willingness to open a representative office for Guatemala to facilitate and strengthen investment operations, adding: "Sharjah is home to more than 2,950 industrial companies, which reflects its capabilities and the development of its pioneering industrial infrastructure across the UAE and the region.

Commending the warm reception, Antonio Malouf said that he is extremely impressed at the innovative services provided by the Chamber to its members and the exceptional privileges provided to foreign investors.

He stressed the importance of stepping up efforts to bolster cooperation relations and explore new opportunities during the upcoming stage in many areas of common interest, such as industry, agriculture, the coffee trade, vegetables and fruits, and others.

Malouf expressed his country's desire to increase mutual visits between the Emirati businessmen and their counterparts in Guatemala, in a way that serves the interests of the two countries and the aspirations of its leadership