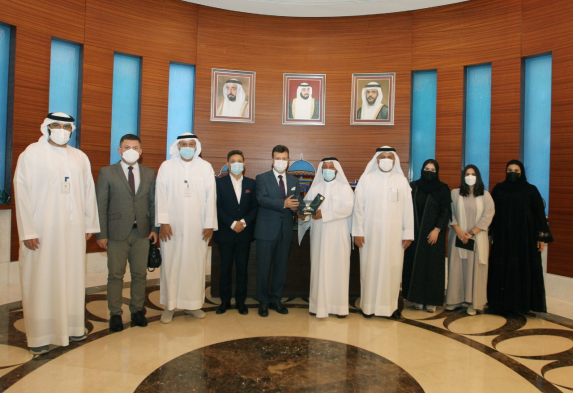 The Macedonian delegation was received by HE Abdullah Sultan Al Owais, Chairman of the SCCI. The meeting explored ways to develop economic cooperation, trade exchange and enhance joint investment with the Sharjah business community, as well as review the opportunities available in all sectors between Sharjah and Skopje.

During the meeting, the two sides discussed the possibility of organizing a joint trade committee under the umbrella of the SCCI and its Macedonian counterpart,

The meeting also discussed organizing a trade mission led by the SCCI to the Republic of North Macedonia, with the aim to hold joint forums for businessmen to find out more about the potential investment and partnership opportunities.

While welcoming the visiting delegation, Abdullah Sultan Al Owais stressed that the SCCI is eager to push the economic and commercial relations between Sharjah and Skopje towards further growth and prosperity in a way that enhances investment cooperation and serves the interests of the two friendly countries.

Al Owais stated the bilateral work areas between the two sides are diverse, stressing that there is a great opportunity to increase the volume of inter-trade exchange in many different sectors in order to take the bilateral trade relations to new heights of cooperation.

Among the most important sectors, he added, is the food security one owing to the common direction of both countries to reinforce this important sector, in light of Macedonia's agricultural potential and abundance of water, in addition to the significant progress in the areas of agriculture and animal production in Sharjah and the UAE in general.

Abdul Qadir Mimidi expressed his country's interest in developing relations with the Emirate of Sharjah in all fields, especially economic and trade exchange.

He pointed to the close relations between the two countries, where the UAE is considered one of the most important target markets for Macedonia to penetrate other regional markets.

He also called on the SCCI o organize an expanded working meeting that brings together economic activities in both countries during the visit of Macedonia's Deputy Prime Minister next November to Expo 2020 Dubai.