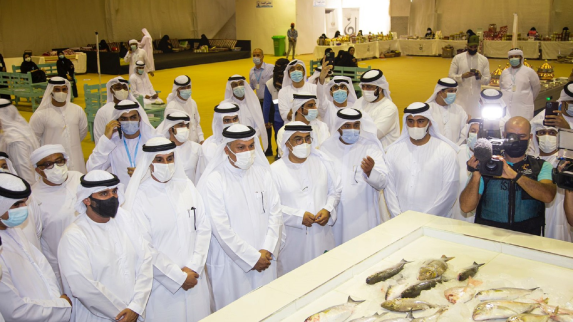 The conclusion of the eighth edition of the Dried Fish and Fishing Festival in Dibba Al-Hisn The activities of the eighth edition, of the Dried Fish and Fishing Festival in Dibba Al-Hisn which was organized over four days, the Sharjah Chamber of Commerce and Industry and the Municipality of Dibba Al-Hisn on the island of Al-Hosn in the virtuous city, have recently concluded. ,it was celebrated through a variety of activities, performances, history, awareness, and recreational competitions. The festival's launching ceremony took place in presence of Sheikh Majid bin Sultan Al Qasimi, Director of the Department of Districts and Villages Affairs, and a group of high administration representatives in the Emirate of Sharjah and Dibba Al Hisn. “Over the years, the festival has become a prominent event that contributes to flourishing the economic, commercial, and tourism movement in the Eastern Region of the Emirate of Sharjah, as it has become one of the city's important economic tributaries, attracting thousands of visitors,” His Excellency Mohammed Ahmed Amen Al Awadi, Director General of the Sharjah Chamber of Commerce and Industry (SCCI) His Excellency Al Awadi stressed the willingness of SCCI to support and promote various activities to preserve the folklore of the United Arab Emirates in general and the Emirate of Sharjah in particular. His Excellency also highlighted the economic dimension of the fishing industry and its development to keep providing means of profitable income for the people of Sharjah. His Excellency Talib Abdullah Al Yahyai, Director of Dibba Al Hisn Municipality, expressed his delight at the distinguished attendance that accompanied the festival's activities, as well as the large public turnout from all over the UAE and the Arab Gulf region, emphasising that the festival is one of the municipality's ongoing contributions in cooperation with its strategic partners.