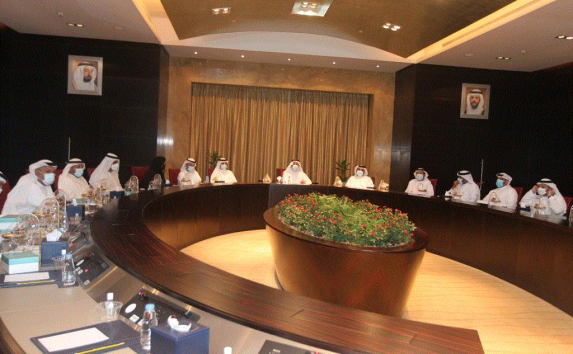 The Board of Directors of the Sharjah Chamber of Commerce and Industry (SCCI) commended the launch of the National Strategy for Industry and Advanced Technology Operation 300bn (Project 300 billion) as a paradigm shift in the UAE’s ongoing efforts to diversify the national economic structure by enhancing the contribution of the industrial sector to the state’s sustainable economic development.

This came during the 16th periodic meeting of the Chamber which was held at its headquarters under the chairmanship of HE Abdullah Sultan Al Owais, Chairman, SCCI.

The meeting discussed the project of upgrading the Chamber’s contact center which includes a massive database on the Chamber’s business. The project aims to enhance networking with the members via digital technologies to improve the services provided and help the concerned parties in the chamber develop future economic feasibility studies and projects.

The meeting also touched on the progress of work at the project of the 10th industrial zone infrastructure reconstruction, which is being carried out in cooperation with the relevant government authorities. About 80 percent of work has been completed so far on the project.

Abdullah Sultan Al Owais underscored that the unlimited support of the wise leadership of the Emirate of Sharjah over the past fifty years has greatly helped the chamber perform its mission in optimally serving the business community, stressing that the SCCI will do whatever it takes to upgrade its services and initiatives and enhance the contribution of the industry sector to the economic growth of Sharjah and the UAE.

Al Owais pointed out that the Chamber is keen to develop specific plans for enhancing the competitiveness of the industrial sector in a bid to support the objectives of the National Strategy for Industry and Advanced Technology Operation 300bn (Project 300 billion), affirming the Chamber’s commitment to backing the economic development seen by Sharjah by fostering the efforts being made by the Chamber in different economic sectors and launching quality and innovative initiatives support the growth of the private sector.

Mohammad Ahmed Amin Al-Awadi shed light on the most important achievements of the SCCI during the first quarter of 2021, where the total number of the new and renewed memberships reached 6230, with a growth rate of 42% compared to the past year, while the total number of certificates of origin issued in Q1 2021 stood at 6706.