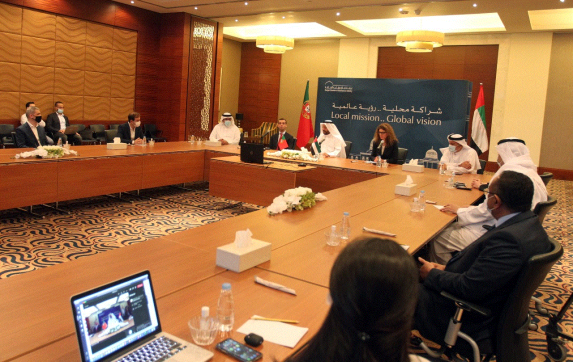 The Sharjah Chamber of Commerce and Industry (SCCI) today launched Sharjah’s first Portuguese Business Council, one of the most prominent outcomes of the chamber’s business council’s initiative earlier announced to set up business councils representing friendly countries and their businessmen in a bid to strengthen joint cooperation and increase the volume of trade and investment exchange.

HE Abdullah Sultan Al Owais, Chairman of the Sharjah Chamber of Commerce and Industry, and Dr. Daniel Pereira Pontes, Economic Counsellor at the Embassy of Portugal and Lourdes Isabello, Chairperson of the Portuguese Labor Council, launched the new council in a ceremony held at the chamber’s headquarters.

Lauding the new step, Al Owais affirmed that the setting up of the Portuguese Business Council will pave the way for launching more councils of friendly countries in the Emirate of Sharjah, as part of the Business Councils Initiative.

“The SCCI takes great interests in supporting this initiative simply because business councils are considered one of the most important methods to strengthen our ties with our friendly countries and to support the mutual relationship between the economic sectors and business communities of those countries,” Al Owais said.

He affirmed that the new business council will further deepen the solid ties between Sharjah and Portugal and is crowning the so many meetings and mutual visits of official and commercial delegations between the two friendly countries over the past years. It will also contribute to boosting the commercial relations and mutual investment between the business community in both countries, taking them into new heights.

“The recently launched business council represents a significant step forward and a perfect opportunity for Portuguese businessmen to enhance networking with their counterparts in the Emirate of Sharjah and build up new relationships, as well as to exchange information, learn new experiences, and inaugurate new ventures, benefiting from the development plans adopted by our wise leadership,” Al Owais added.

He went on to say: “We are expecting that these efforts will bear fruit within a short period, where the Portuguese business community can promote their businesses in the UAE, launch new economic initiatives, take part in exhibitions and conferences, exchange trade delegations, increase trade exchange between the two countries, and take advantage of the outstanding services provided by the Sharjah Chamber”.

Lauding the chamber’s strenuous efforts made to launch the Portuguese Business Council, Dr. Daniel emphasised that since 2012, commercial relations have significantly developed between the two friendly countries, something which will further be boosted by the establishment of the new council.

“The council will not only contribute to developing and devoting economic cooperation but will also help enhance investment and trade exchange between the two countries, which last year reached about 300 million euros,” Pontes said.

For her part, Lourdes Isabello called on the Emirati business community to visit Portugal and learn about the available investment environment, adding that she will encourage Portuguese companies to visit Sharjah and learn about its economic opportunities