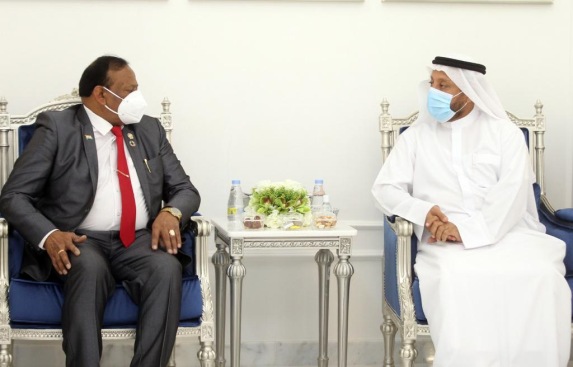 The Sharjah Chamber of Commerce & Industry, SCCI, reviewed means of enhancing economic, investment, and commercial relations and expanding the prospects of cooperation with the Indian State of Karnataka.

The meeting touched on some topics of mutual interest, including strengthening commercial, investment, and industrial relations between Sharjah and Karnataka and expanding the prospects of cooperation between the Sharjah Chamber and the Federation of Karnataka Chambers of Commerce & Industry to help the private sector in both countries take better advantage of the available investment opportunities.

“The bilateral relations between the UAE and India are a deeply-rooted one and are based on mutual respect and common interests in several fields, especially the economic field,” said Abdullah Sultan Al Owais.

He pointed out that the UAE is one of India’s largest trade partners in the Middle East, while India is the UAE’s first trade partner, stressing the Chamber’s eagerness to explore opportunities for investment in Karnataka’s emerging export sectors.

In turn, Perikal M Sundar lauded the solid and long-standing relations between India and the UAE, and Sharjah and Karnataka in particular, explaining that the meeting seeks to boost bilateral cooperation and to take the commercial and business ties to new heights through investment inflows and partnerships between both sides.