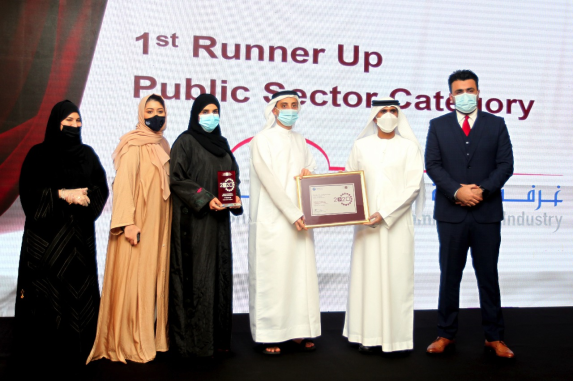 The Sharjah Chamber of Commerce and Industry (SCCI) has won the 13th Arabia Corporate Social Responsibility Awards in the category of public sector organization/ departments.

Organized by the Arabia CSR Network, the award is the first-of-its-kind initiative to gain the support of the leadership of Dubai, the UN Global Compact, the United Nations Environment Programme, the League of Arab States, and a wide host of private sector entities.

The SCCI was crowned winner of the public sector organization/ departments category during a ceremony  at the JW Marriott Marquis Hotel under the patronage of H.E. Engr. Sheikh Salem bin Sultan bin Saqr Al Qasimi, Chairman of the Department of Civil Aviation of Ras Al Khaimah.

Abdul Aziz Shattaf, SCCI Assistant Director-General, Members Services Sector and Director of Sharjah Exports Development Center, received the accolade in the presence of Habiba Al Marashi, President and CEO of the Arabia CSR Network, and Mariam Al Ali, Director of Strategy and Institutional Excellence Office at the Chamber, as well as a number of senior officials from the SCCI.

The honour comes in recognition of the chamber’s leading role as a responsible entity towards the society and in appreciation of its contributions to social responsibility.

HE Abdullah Sultan Al Owais, Chairman of SCCI, expressed his thanks and appreciation to the Arabia CSR Network for honouring the achievements that serve societal and sustainability issues in the UAE and the Arab region, adding that the Chamber is forging ahead under the wise directives of H.H. Dr. Sheikh Sultan bin Mohammad Al Qasimi, Supreme Council Member and Ruler of Sharjah.

“Therefore, we adopt a clear-cut vision and mission targeting sustainability in business and the economy in order to make the Emirate of Sharjah a global hub for businesses in light of a sustainable, competitive knowledge-based economy,” Al Owais said.

Meanwhile, Mohammed Ahmed Amin Al Awadi, Director General of the SCCI, affirmed the chamber’s commitment to implementing the government’s directives and strategy to promote social responsibility and support the sustainable social and economic growth in the emirate.

“We are doing so by launching humanitarian, academic, knowledge, cultural, social, health, environmental and other initiatives, as well as supporting university and school students through the Sharjah Chamber Award for Innovators and the “Mehnati” initiative for field training implemented by the SCCI Training and Development Centre,” Al Awadi added.

“We have rolled out many initiatives in this field, including the social responsibility platform that we have launched earlier. The chamber is also allocating an annual financial sum for social care as part of its budget. A special department has also been created for public relations, social responsibility and in the environmental field, something which resulted in the chamber being granted the Integrated System of Management for Quality (ISO 9001:2015), Environment (ISO 14001:2015).