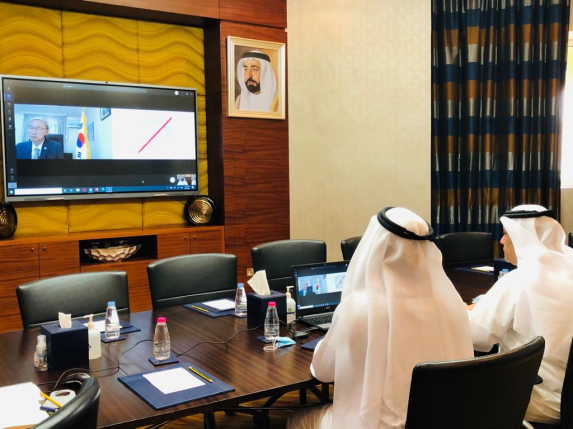 The Sharjah Chamber of Commerce & Industry, SCCI, recently held a virtual meeting with the Consulate General of the Republic of South Korea in Dubai, during which the two sides discussed prospects for economic and commercial cooperation between investment enterprises in Sharjah and their South Korean counterparts, as well as means to support bilateral partnerships in various sectors and economic fields.

The meeting was held in the presence of HE Abdullah Sultan Al Owais, Chairman, SCCI, HE Chun Young-Wook, Consul General of the Republic of South Korea in Dubai, and HE Mohammad Ahmed Amin Al-Awadi, SCCI Director-General.

The two sides reviewed topics of common interest that help enhance investment and industrial cooperation relations between Sharjah and South Korea and serve the interests of the private sector on both sides.

Abdullah Sultan Al Owais said: “The SCCI is keen to step up economic cooperation between Sharjah and South Korea, provide the necessary facilities for strengthening the volume of trade exchange and mutual investment, and develop communication mechanisms between business communities of  the two friendly countries.”

“The privileges granted by the Emirate of Sharjah to foreign investors would help encourage South Korean businessmen to take the emirate as a headquarter for their businesses and projects, thus boosting their presence in the region,” Al Owais noted.

He pointed to the deep relations between the SCCI and South Korea, which is manifested in the signing of a Memorandum of Understanding (MoU) with the Gyeonggi Business and Science Accelerator, South Korea to enhance means of cooperation between the two sides and serve the interests of businessmen and investors in Sharjah and Gyeonggi-do Province, as well as to expand the commercial and investment relations between the two sides and to exchange trade delegations.

Commending Sharjah’s economic development in various domains,  Chun Young-Wook expressed his country's interest in pushing and enhancing mutual trade and investment relations between the private sectors in South Korea and Sharjah to the best levels and building distinguished and stronger economic relations with the SCCI and companies operating in Sharjah.

Mohammad Ahmed Amin Al-Awadi underlined that the SCCI attaches special importance to the cooperation with South Korea, thanks to the country's diversified components and opportunities in all fields, especially in the electronic industries, the automobile industry, the petrochemical industries, and the technology and communication products, noting that South Korea is one of the most important commercial partners of the UAE and Sharjah in particular.

It’s worth noting that the bilateral relations between the UAE and South Korea have witnessed a significant development during the last ten years, where the two friendly countries have managed to develop strong relationships based on cooperation and mutual confidence in various fields, especially in clean energy, oil, health, mutual investments, and active trade.

At the end of 2019, the volume of non-oil trade exchange between the two sides has reached about AED 34.8 billion, reflecting the strength of cooperation and partnership between both sides.