The 5th cycle of the Economic Sustainability Forum 2020 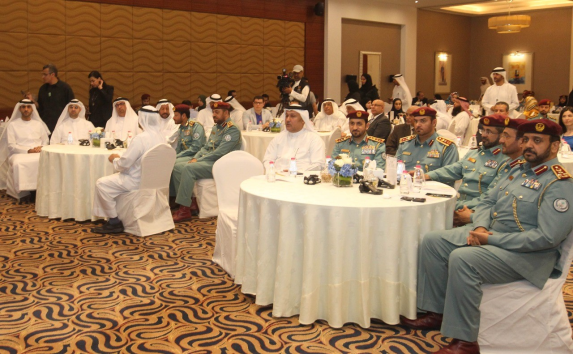 Sharjah Chamber of Commerce and Industry announced the launching of the first award for economic establishments that contribute to security and police work within the emirate, to be held in 2021, as announced during the 5th cycle of the Economic Sustainability Forum 2020, organized by Sharjah Police in cooperation with Sharjah Chamber under the slogan "Sharjah: A Sustainable Security and Economy", which stressed the need for the security establishment and the public and private sectors’ institutions to work closely together in order to build a comprehensive security system of economic, social and humanitarian dimensions and to work continually to improve security services being provided, supporting efforts to achieve self-preventive security and consolidating civil safety measures being implemented at economic, commercial and industrial institutions. The Forum was held at Sharjah Chamber’s headquarters and was attended by HE Abdullah Sultan Al Owais, Chairman, HE Major General Saif Al-Zari Al Shamsi, Commander-in-Chief of Sharjah Police, HE Ali Al-Khayal, board member, HE Khaled Jassem Al-Midfa, Director, Sharjah Commerce & Tourism Development Authority, HE Humaid Mohammed bin Salem, Secretary General of the Federation of UAE Chambers of Commerce, His Excellency Mohammed Ahmed Amin Al Awadi, Director General, HE Brigadier Abdullah Mubarak bin Amer, Deputy Commander-General of Sharjah Police, and HE Colonel Sami Khamis Al Naqbi, Director of Civil Defense in Sharjah, Colonel Abdullah Saleh Al-Naqbi, Deputy Director of the Entry Permits Department in the General Directorate of Residency and Foreigners Affairs, and a number of representatives of government authorities, general managers, department directors and senior officers at Sharjah Police, as well as representatives of economic, financial, banking and investment institutions in the emirate. HE Abdullah Sultan Al Owais opened the Forum by announcing Sharjah Chamber’s initiative to launch an award for economic establishments that contribute to security and police work and affirmed Sharjah Chamber's keenness to organize the forum annually in cooperation with Sharjah Police in order to bring together government bodies in the emirate as security plays a key role in the sustainable development process. Security Requirements For his part, Major General Saif Al-Zari Al-Shamsi stressed the need to identify security requirements of all economic, financial, commercial, industrial and other sectors that contribute to promoting sustainable development and to address the problems that may hinder any sector’s performance and negatively impact the community’s prosperity and happiness. Major General Al Zari thanked His Highness Dr. Sheikh Sultan bin Muhammad Al Qassimi, Member of the Supreme Council and Ruler of Sharjah, for his constant patronage and continuous support for Sharjah Police and its strategic partners in all sectors concerned, with the feeling of safety at 99% among the emirate’s population in 2019, according to statistics published by the Department of Statistics and Community Development in Sharjah. Integration of Government Performance to Achieve Sustainability The Forum included presentations given by government agencies on the integration of government performance in the application of sustainable security standards, where Lieutenant-Colonel Dr. Sameh Al-Halyan talked about Sharjah Police’s keenness to meet security indicators to achieve economic sustainability and reviewed key achievements improving police services and facilities provided for the business sector. Side Exhibition A side exhibition was held along with the forum, in which the Federal Authority for Identity and Citizenship, the Sharjah Commerce & Tourism Development Authority, the Department of Economic Development, Civil Defense, the Sharjah Export Development Center, and Tijarah 101 participated, along with a special corner for Sharjah Police, which showcased their security services such as service “Aoun”, which is the first facility to provide services through WhatsApp, 24 hours a day, and includes all the services provided by the police headquarters as well as receiving criminal and traffic reports. Honored participants included the Sharjah Commerce and Tourism Development Authority, Sharjah Municipality, the Department of Economic Development in Sharjah, and Kingston Holding Company for taking part in the Noor Sharjah project, and Mr. Saeed Ghanem Al-Suwaidi, chairman of representative committee of the real estate sector in Sharjah Chamber and Chairman of Al-Ghanim Real Estate, for taking part in projects and initiatives that support security and the economy in the emirate. The forum was concluded by adopting a number of recommendations and proposals that contribute to enhancing security stability, reducing potential risks in the economic, industrial and commercial sectors and creating the business environment with security as an essential pillar for growth, economic prosperity and sustainable development.