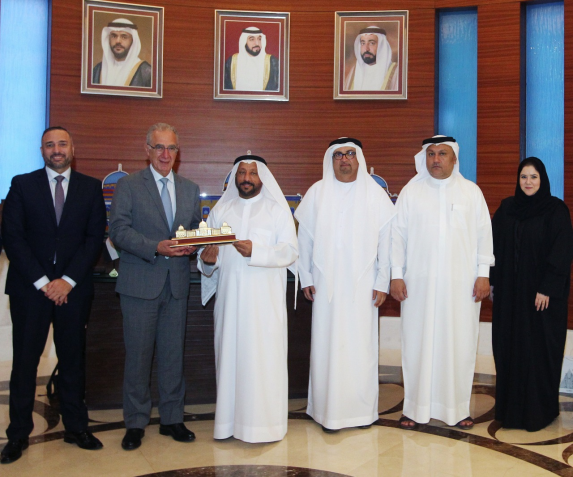 HE Abdullah Sultan Al Owais, the Chairman of the Sharjah Chamber of Commerce & Industry, SCCI, recently received a high-level US delegation headed by Seth Oppenheim, Commercial Officer, SelectUSA Investment Summit, accompanied by George Calboh, US Department of Commerce representative. The meeting was held at the SCCI headquarters in the presence of a number of officials at the US Embassy in Abu Dhabi and Fatima Al Mokarrab, SCCI’s Director of International Relations Department. The two sides discussed the cooperation prospects for enhancing joint investment and building the foundations for serious future work between economic activities in both the Emirate of Sharjah and the United States of America. Al Owais was also briefed on the details of the SelectUSA Investment Summit and the field visits that will follow the upcoming summit on June 1. Discovering the Investment Climate Commenting on the meeting outcomes, Al Owais said: “This meeting is an important opportunity to develop strategic relations between the two sides in various sectors and to establish new projects to enhance the common endeavors to support economic growth in both countries. This visit is also an important platform that allows investors and businessmen in the US to discover the investment climate in the Emirate of Sharjah and establish solid economic relations that support the flow of trade exchange and economic cooperation between the two friendly countries.” Al Owais explained that the UAE is the largest Arab investor in the US market, with a total investment of about $ 4.8 billion, stressing the depth of the bilateral relations between the two countries, especially in the commercial and investment sectors, where the non-oil foreign trade between the two countries recorded about 24.5 billion dollars in 2018. “The SCCI is calling on the business community in Sharjah to take part in the SelectUSA Investment Summit, as this would help increase the volume of bilateral trade exchanges, in addition to leveraging investment opportunities in the US market and learning more about the best practices and technical progress witnessed by American industries in the productive and innovative sectors,” he concluded. Expressing his admiration and appreciation for Sharjah’s holistic renaissance, Seth Oppenheim emphasized his country’s interest in enhancing cooperation and commercial exchanges with the Emirate of Sharjah and pushing it forward for the benefit of both parties. Oppenheim called on the SCCI and the Emirati business community to visit the US and seize the opportunity to participate in the summit to hold direct meetings and to take advantage of the investment climate and to get acquainted with the main areas of the US economy including; information and communications technology, advanced industries and other sectors. Strengthening Cooperation with Brazil In another meeting, the SCCI’s Chairman met with Rubens Hanoun, the President of the Brazilian Chamber of Commerce and Industry and his accompanying delegation, in the presence of HE Hamid Mohammed Bin Salem, Secretary-General of Federation of Chambers of Commerce and Industry, HE Mohammad Ahmed Amin Al-Awadi, SCCI’s Director-General, and Fatima Al Mokarrab. The meeting reviewed Sharjah’s most important economic competitive qualities. The two sides also discussed a number of issues of common interest, which contribute to enhancing the commercial, investment and industrial cooperation relations between Sharjah and Brazil and achieving the aspirations of the private sector on each side. The meeting also underlined the importance of organizing many bilateral meetings and opening direct communication channels between businessmen and merchants of both parties to increase trade exchange, owing to the various economic qualities in the industrial, commercial, agricultural and tourism sectors. The meeting concluded with exchanging shields and souvenirs between the two sides who underlined the importance of this visit and its positive impact on the economic cooperation horizons between the Emirate of Sharjah and Brazil.