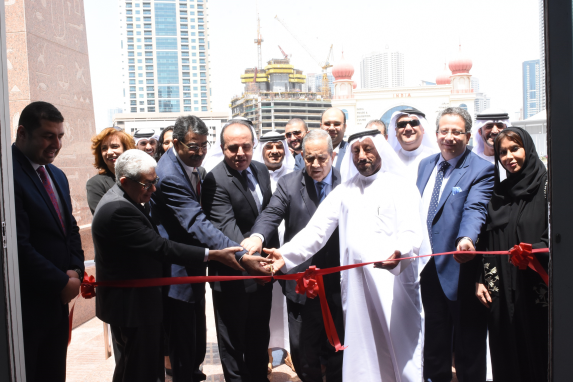 Sharjah Chamber of Commerce and Industry (SCCI) and the Embassy of the Arab Republic of Egypt in the UAE opened the permanent exhibition for the Egyptian industries and building materials in the permanent Egyptian commercial center in Sharjah.

The new Egyptian trade fair which was recently opened in the permanent Egyptian commercial center within Sharjah Expo City project and attended by HE Abdullah Sultan Al Owais, Chairman, and HE Wael Gad, Egyptian Ambassador to the UAE, comprises various exhibits including building materials, hand-made carpets, wood products, garments and other high quality Egyptian products. The event was attended by representatives of several entities, major industrial companies and the National Service Authority in Egypt, well as the Federation of Egyptian Industries.

The opening ceremony was attended by HE Ali Mohammed Al Khayyal and HE Raghda Hamad Omran Taryem, board members,  Mohammed Ahmed Amin, Assistant Director General for the Communication and Business Sector, HE Ambassador Jamal Al Bayoumi, former Egyptian foreign minister  and Chair of Arab Investors Union, HE Tariq Hussain, Consul General of Egypt in, Dr. Yunan Edward, head of the Egyptian Trade Office in Dubai, Mohamed Al Maghrabi, Trade Consul as well as a number of officials from both sides and businessmen from Sharjah and Egypt.

HE Abdulla Sultan Al Owais, Chairman, said that the exhibition comes within the framework of the Center's program and the permanent Egyptian trade exhibition for organizing economic events introducing the commercial and industrial sectors of the Arab Republic of Egypt, creating and developing economic relations with a number of countries within the framework of the ambitious economic vision of Sharjah emirate and the directives of His Highness Dr. Sheikh Sultan bin Mohammed Al Qassimi, Supreme Council Member and Ruler of Sharjah and the diligent follow-up of HH Sheikh Sultan bin Mohammed bin Sultan Al Qassimi, Crown Prince and Deputy Ruler of Sharjah.

Al Owais expressed his hope for the permanent Egyptian Trade exhibition to contribute to promoting cooperation and coordination between the UAE and Egyptian business communities to a wider level of joint work. The exhibition will serve as a role model and reflect the growth and development of Egyptian products in various sectors and make Egyptian products permanently available in domestic markets. Al Owais added that the launch of the exhibition represents a translation of one of the most important objectives for which the Egyptian Trade Center was established and stressed the Chamber's commitment to providing all means of support to Egyptian  companies operating in the emirate, thus enhancing close ties and increasing brotherly ties and trade and cultural exchange between Sharjah and Egypt and establishing joint ventures in various sectors and vital areas.

Ambassador Gad said the opening of the exhibition is part of the Egyptian Center's plan to familiarize the UAE market with Egyptian products and stressed the Egyptian Embassy’s keenness to support every activity that contributes to the development of relations between the two countries at all levels, and he pointed out that the exhibition deserves all support to enable it to achieve its objectives in the interests of the two countries.

For his part, Ambassador Jamal Al Bayoumi expressed his hope for the exhibition to contribute to enhancing trade exchange between Egypt and the UAE and increase mutual investment between the two sides and stressed Egyptian businessmen’s keenness to contribute effectively to economic relations between the two countries and enhance their contribution to the private sector’s development by strengthening investment partnerships and implementing joint projects, especially in the industrial sector, and double the trade exchange of Arab products.

In his turn, Dr. Yunan Edward pointed out that the Commercial Office in Dubai will support the permanent exhibition through an integrated operational plan to introduce the UAE business community to the services provided by the exhibition and the areas of cooperation and investment opportunities it offers. He thanked Sharjah Chamber for its continuous efforts and support to Egyptian businessmen and companies operating in the emirate.

The quarry division established a protocol for cooperation with the organizing company of the exhibition, in agreement with the Egyptian Trade Center, in order to activate the Egyptian export development strategy. The quarry division hopes for the exhibition to become an honorable window for Egyptian products that will help open new markets in the Gulf region in general and the UAE in particular and provide opportunities for importers in the Gulf and east Asian countries to learn about the excellent Egyptian products to be displayed throughout the year.

The permanent Egyptian commercial exhibition was built on 1900 square meters and comprises a built area of 3750 square meters in one of the distinguished areas in Sharjah city within the Expo City project to promote and market Egyptian products in the UAE, the Gulf region and re-export countries. The Center is one of the Chamber's initiatives aimed at encouraging various countries to establish permanent trade centers and exhibitions in Sharjah in order to offer their products and services directly to the local market and serve as platforms for businessmen to promote and introduce their activities through an important hub for organizing specialized fairs as every country has its own resources for investment, industry and production.