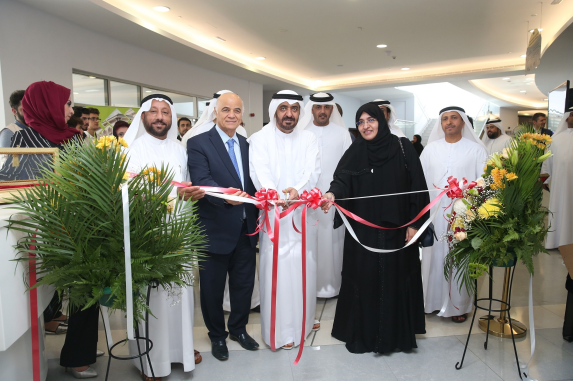 Under the patronage of His Highness Dr. Sheikh Sultan bin Mohammed Al Qasimi, Supreme Council Member and Ruler of Sharjah, the 3rd International Forum on Innovation and Entrepreneurship was launched today. The Forum is being organized by the College of Business Administration at the University of Sharjah, in cooperation with the Sharjah Chamber of Commerce and Industry (SCCI).  The Forum will be held from the 15th to the 18th of February and will take place at the Sharjah Center for Astronomy and Space Sciences.

The inauguration ceremony was attended by HE Khawla Al Mulla, Chairperson of the Sharjah Consultative Council (SCC), HE Abdullah Al Owais, Chairman of Sharjah Chamber of Commerce and Industry (SCCI), Dr. Humaid Majol Al Nuaimi, Chancellor of the University of Sharjah, as well as representatives from both the public and private sectors.

The Forum is considered an essential event of the 3rd edition of UAE Innovation Month in Sharjah, where it has succeeded in attracting a high number of students, entrepreneurs, and prominent international and local experts in the fields of innovation and entrepreneurship.

During a keynote speech at the Forum, HE Khawla Al Mulla, Chairperson of the Sharjah Consultative Council (SCC), stated that the Sharjah Consultative Council is pleased to announce that they are launching the “Decision System Support” project during the UAE Innovation Month, in cooperation with the University of Sharjah. She added that this project is one of the latest technological initiatives that simplifies decision making and makes use of the latest technologies in supporting businesses and decision makers with their workload by providing them with better services.

HE Abdullah Al Owais, Chairman of Sharjah Chamber of Commerce and Industry (SCCI), stated that the fundamentals of a successful and sustainable economy are based on two pillars: innovation and entrepreneurship. He stated that the emirate of Sharjah has managed to reserve a place among the most prominent academic and economic cities in the world due to the close cooperation and constant coordination between the various bodies of the Sharjah community, which helps to serve the common developmental goals under the wise vision of His Highness Dr. Sheikh Sultan bin Mohammed Al Qasimi, Supreme Council Member and Ruler of Sharjah.

Al Owais stated that the Chamber believes that the sustainability of economic growth partly depends on the capabilities of the Emirate’s youth. He added that the academic institutions in the Emirate help to develop the capabilities of students in accordance with the best international educational standards. He also added that the Forum, which is organized by the University of Sharjah in cooperation with the SCCI, is part of Sharjah’s vision to be among the most innovative cities in the region and the world.

Al-Ali stated that the competition is organized according to internationally recognized standards that match the world's most innovative student award competitions, in which the competition requires the students’ innovative projects to have a clear positive impact on society and the environment, to be economically feasible, and to contribute to the growth and development of the economy.

Al-Ali talked about the strategic partnership between the Consultative Council of Sharjah and the University of Sharjah, where they partnered on the “Decision System Support” project, which employs artificial intelligence mechanisms within a sophisticated technology system that aims to analyze data and help decision makers make the right decision, and which will save a lot of time and effort.

The first day of the forum featured several speakers which included Dr. Abla Abdel-Latif, Chairwoman of the Presidential Advisory Council for Economic Development of the Arab Republic of Egypt, and David Masefield, President of the Canvas Co-working Space in Toowoomba, a leading business and entrepreneurship support organization, who spoke in a session entitled “Incremental vs. Disruptive Innovation: What is it and how has new technology affected companies over the time.” Rasha Abousamra, Lecturer at Higher Colleges of Technology, spoke at a session entitled "Data Money," while HE Sheikha Hind Bint Faisal Al Qassimi, CEO of the Velvet Magazine, concluded the first day of the Forum with a session in which she reviewed Entrepreneur Success Stories, and stories of people who did not succumb to the challenges of pursuing and realizing innovative ideas.

The Forum will continue on Friday with sessions and training workshops on various topics related to innovation, entrepreneurship and development of students' talents and skills. On Saturday, interactive sessions will feature speakers such as Dr. Amal Al-Ali, Assistant Professor of the College of Business Administration and Chairman of the Organizing Committee of the Forum, who will speak at the Forum in a session entitled "Design Thinking," which is a modern way to develop innovative ideas.

Other speakers will include Saad Al Rubaiaan, Chairman of Kuwait Business Council in Dubai and Managing Partner at CYLKA Communication and CSR, who will discuss how Entrepreneurship can make us happier with examples of role models from UAE Leaders, and Khalfan Jasim, an entrepreneur and former Development Manager at Tejar Dubai, who will review his experience in the entrepreneurial world. David Masefield will also discuss how to develop a startup Ecosystem in a session. On Saturday, Khaled Youssef, Director and a member of Egyptian parliament, and Dr. Khalid Makled, Business Development Manager at Ruwad Establishment, will participate in an evening seminar entitled "Innovation and creativity – Case Study from Media Production".