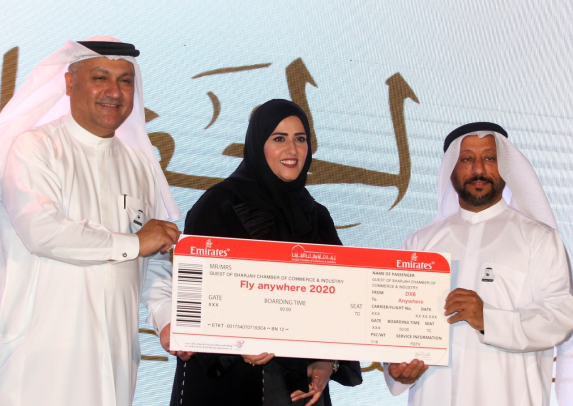 Sharjah Chamber of Commerce and Industry organized its annual celebration to honour its employees, Expo Center Sharjah, Sharjah International Commercial Arbitration Center - Tahkeem, sponsors and partners, as part of its strategy to support and motivate staff members as well acknowledge its partners’ efforts in supporting its projects and initiatives

This year’s event came under the slogan “Fifty Years of Giving” as it coincided with the Chamber’s Golden Jubilee celebration, with Sharjah emirate becoming an international business destination thanks to its ambition for a future of creativity, innovation, and a knowledge-based economy.

The ceremony was held at Expo Center and was attended by HE Abdullah Sultan Al Owais, Chairman, board members, HE Mohammed Ahmed Amin Al Awadi, Director General, HE Saif Muhammad Al Midfa, CEO of Expo Center, Ahmed Saleh Al-Ajlah, Director of the Sharjah International Commercial Arbitration Center, Merryam Saif Al Shamsi, Assistant Director General of the Chamber for the Support Services Sector, Abdulaziz Muhammad Shattaf, Assistant Director General of the Chamber for the Members Services Sector and Director of the Sharjah Export Development Center, and Jamal Saeed Buzanjal, Director of the Media Department and head of the organizing committee, as well as representatives of sponsors and members of staff.

The ceremony included a variety show with a documentary film showcaseing the milestones of success for Sharjah Chamber, Tahkeem, and Expo Center.

It is noteworthy that the Sharjah Chamber of Commerce and Industry was established in 1970 and is one of the oldest chambers of commerce in the UAE. Since 1980 its services and activities have extended to all of the emirate’s cities through its 4 branches in Khor Fakkan, Kalba, Al Dhaid and the central region, and Dibba Al-Hisn, in addition to offices in the model industrial zone and in the headquarters of the Department of Economic Development in Sharjah, as well as in the free zones. Numerous institutions and specialist bodies are owned by or operate under Sharjah Chamber’s umbrella such as Expo Center, the Sharjah International Commercial Arbitration Center,  Sharjah Export Development Center and other bodies that play an important role in promoting the emirate as an international business hub.

Sharjah Chamber’s headquarters was opened in 2008 and is one of the most beautiful buildings in the UAE, spanning over an area of 100 thousand square meters and a building that includes suites, administration departments, bespoke halls for different activities and conferences, in addition to the  Permanent Exhibition of Local Industries.