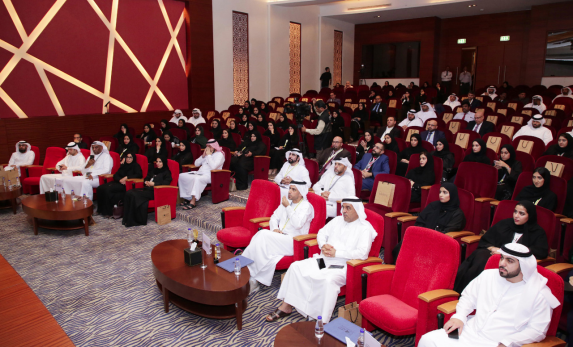 The Sharjah Chamber of Commerce & Industry (SCCI) held a forum on the “Best Practices for Sharjah Excellence Award”. The event comes as part of SCCI’s keenness on further enhancing the effective partnership with various business sectors towards the implementation of the highest quality standards and consolidation of the culture of excellence. The forum shed light on a number of topics, the most important of which is introducing the services of the National Program for Small and Medium-Sized Enterprises, highlighting the best practices in the field of local and international institutional excellence and the best practices of the Sharjah Excellence Award winners, especially the winners in the category of Emerging Projects and Entrepreneurs. Present at the meeting were Maryam Saif Al Shamsi, Assistant General Director, Support Services Sector, SCCI, Abdul Aziz Shattaf, Assistant General Director, Members Services Sector, SCCI, Nada Al Hajri, General Coordinator of the Sharjah Excellence Award, Dr. Adeeb Al Afeefi, Director, National Program for Small and Medium-Sized Enterprises and Dr. Laila Al Jassmi, Founder & CEO, Health Beyond Borders. The forum also witnessed the participation of a large number of government and private sector representatives, corporate directors, institutional excellence experts, emerging entrepreneurs, and university students. In her speech on behalf of HE Mohamed Ahmed Amin, SCCI’s Director-General, Nada Al Hajri, General Coordinator of the Sharjah Excellence Award, said: “The Best Practices Forum of the Sharjah Excellence Award is one of the fundamentals of the Award, in addition to being the annual starting point towards organizing an entirely new edition. Our aim is to maintain the leading role of the Sharjah Excellence Award in launching qualitative initiatives to enhance the culture of quality and excellence, as they are the foundations of the economic prosperity and sustainable development at Sharjah and UAE level.” Al Hajri added: “Since its launch in 2002 as one of the SCCI’s initiatives, the Award aimed at widely spreading the institutional governance, encouraging the adoption of quality standards and work ethics, stimulating environment-friendly practices and reinforcing the role of economic institutions in advancing the sustainable development through the provision of various facilities, as well as launching new projects and initiatives.”