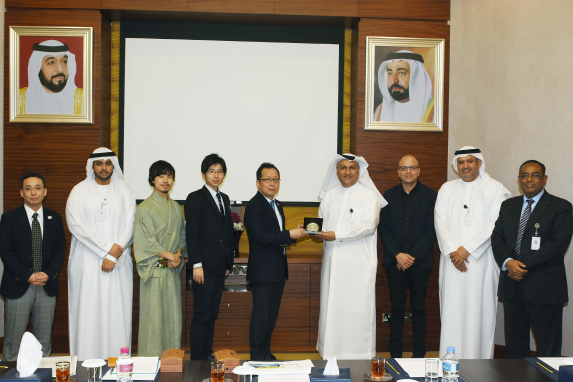 Sharjah Chamber of Commerce and Industry (SCCI) stressed the important role being played by small and medium enterprises in supporting the overall economy and the major sectors, while the Chamber has always sought to support all entrepreneurs through various initiatives and programs in coordination and cooperation with the institutions concerned with supporting enterprises locally and federally.

The Chamber pointed out that it works through its outstanding relations with regional and international bodies and centers to utilize its expertise in serving affiliate small and medium-sized enterprises as well as young people of both sexes who wish to establish their own investment projects.

Through the meeting, which was attended by Mohammed Ahmed Amin, Director General Assistant for Communication and Business sector, Kazumasa Susaki, General Manager of Tokyo SME Support Center, the Japanese delegation accompanying Omar Ali Saleh, Director of the International Relations department and Jamal Saeed Buzangal, Director of the Media Department, Sharjah Chamber praised Japanese expertise in supporting enterprises that the Chamber is looking forward to utilize through the Japanese center to enhance its role of supporting entrepreneurs in Sharjah.

Issues of concern were discussed during the meeting including building a collaboration partnership between the Chamber and the Japanese Center to serve joint interest.

Mohammad Amin praised the outstanding economic relations that bind the two countries and Sharjah Chamber’s role in supporting these relations, and he reviewed the services that are provided by the Chamber and its affiliates to the business community including initiatives, programs, and activities, and he pointed out that holding face-to-face meetings like this are vital for developing partnerships that expand the scope of work and help find new means for serving SMEs and its affiliate members.

The general manager of the Japanese center talked about the services that are provided by the center to support SMEs in Tokyo that account for 11.5% of the total number of businesses in Japan.

Kazumasa Suzuki also gave a summary of  the center since its founding in 1966, its staff of 700 who support 65,000 companies, and exploring prospective investors through a vast data base in order to help its members in the long run.

Susaki expressed his hope for this meeting to be the starting point for useful future relations that serve both sides and entrepreneurs of SMEs in the two countries.

The Japanese delegation toured the industrial products pavilion to learn about national products and industries and praised the sector’s development and role in enhancing opportunities for cooperation between SMEs in Sharjah and Japan.